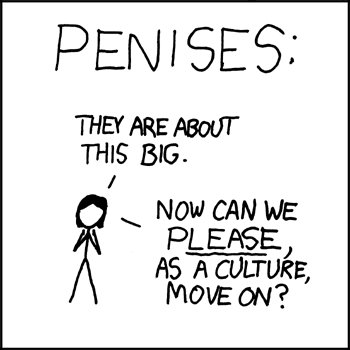 As Randall Munroe (www.xkcd.com) commented on penises, isn’t it time as a culture we got over breast size?

I like breasts, don’t get me wrong, but as a woman with a DD cup, I’ve thought about breast reduction so they stop getting in the way so much. Have you ever tried to exercise with large fleshy meatsacks strapped to your chest boys?

Believe it or not, many a large breasted woman is jealous of her small breasted friend, the one who will always have perky breasts that will never be affected by gravity, the one who doesn’t have to wear bras ever. Unfortunately those lucky women often feel that their breasts are not as nice as those of us who have larger ones, and they’re sad about it. Trust me, they’re much luckier than me.

So, why this fascination with large breasts? I blame you men. Oh and the women who pander to such men, well not just to men, but to society’s every expectation about what a woman should look/act like, who are then cruel to women who either don’t fit these expectations or who willingly walk away from them.

So… how many men out there are breast fixated? Something about being breastfed as children apparently, or not being breastfed enough. I’m not a psych and make no pretences to understand the deep motivational forces of society, but I’m certainly suggesting that the focus on large breasted women should stop.

What upsets me, is that women who may or may not have had really nice breasts before they had theirs surgically enhanced, get it done and then have horrible disasters on their chests. Nipples that point in directions that nipples hadn’t ever pointed before, breasts that appear as inflated basketballs with no softness whatsoever. I think its the missing softness that upsets me the most. Breasts are soft and snuggly… turning one into an over-inflated air cushion does nothing for me whatsoever.

Really, you’re beautiful… even if people tell you you are not.