So I have recently returned from a two and a half week trip in India  I have a lot of photos, they are here.

Where do I start.  There are some amazing contrasts in India, not just the well-off and poor divide, but the rapid pace of development and ancient monuments, pollution/litter and natural beauty, corruption and generosity, and traffic… that’s a whole category on it’s own.

I’ve travelled through bits of Malaysia, and I thought that the traffic would be quite similar when I got to India.  And it was… but then not.

There are significantly more people in India than Malaysia, and therefore there are significantly more vehicles.  In India (and I assume many other countries) there are the actual road laws, then road rules (what people tend to abide by) and then opportunism.  Road markings (lanes, double lines, etc) are merely suggestions that if there isn’t much traffic on the road you will pay attention to, but if there is a lot, then you will squeeze all the traffic you can into as much space as possible, and all jointly crawl to your destination.

There were a few points during the trip when I was very concerned for my safety.  Driving around hairpin bends very fast with no functional seat belts in the car.  When the driver was tailgating someone at 100kmh, with no functional seat belts.  Really, I was afraid when there weren’t any seat belts.  I like seat belts, they help in keeping you alive in the event of an accident.  When we traveled with the private tour we’d organised, there were seat belts in the car, and our driver (most awesome driver he was), drove very conservatively and patiently with us.

Earlier this yea when I was in Malaysia with Scott, we caught a taxi to a food market for dinner one night.  As we reached for the seat belts in the car, the taxi driver looked at us and said, “Oh, you’re from Australia”, without asking.  So we’re famous for wearing seat belts.

For those of us of a certain age, you might remember the days before the Keep Australia Beautiful movement really kicked off.  You might remember walking through a park, or past a vacant block and seeing chip packets, empty beverage cans, bottles, and confectionery wrappers, discarded everywhere.  That’s where India is right now.  There is a growing environmental movement in India from what I could tell, but with next to no public waste infrastructure, and no habits of taking rubbish home, lots of litter is thrown onto the street by pedestrians and people in cars. 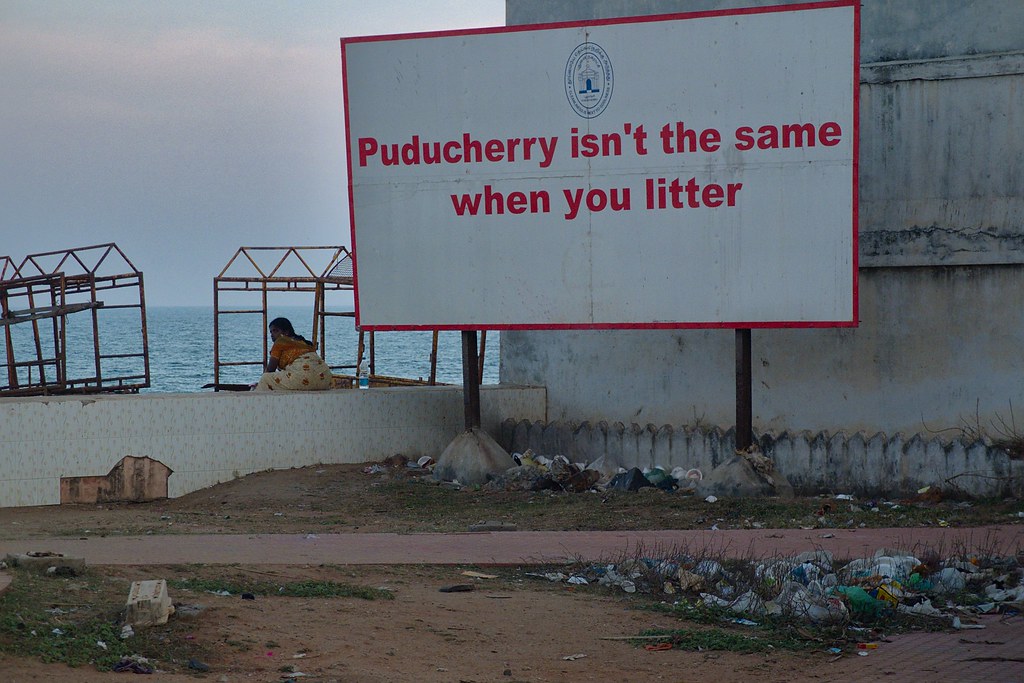 Pondicherry isn’t the same when you litter by Delphinidaesy

Like many things in India, this will change, and it will no doubt change rapidly.  India is building a metro network for many of their cities.  I was lucky enough to be able to go into a newly opened Metro station in Delhi, and it was very nice.  When I return to India, I will certainly be travelling a lot by train.

In 2006, the National Urban Transport Policy proposed the construction of a metro rail system in every city with a population of 20 lakh.[2] On 11 August 2014, Union Urban Development Minister M. Venkaiah Naidu announced that the Union Government would provide financial assistance, for the implementation of a metro rail system, to all Indian cities having population of more than 1 million.[3][4] In May 2015, Prime Minister Narendra Modi approved the Union Urban Development Ministry’s proposal to implement metro rail systems in 50 cities. The majority of the planned projects will be implement through special purpose vehicles, which will be established as 50:50 joint ventures between the Union and respective State Government. The Union Government will invest an estimated ₹5 lakh crore (US$75 billion).[5][6] Currently, rapid transit systems operate in 15 cities and more are under construction or in planning in several cities of India. (Wikipedia)

Improvements in public transport will drive improvements in pollution, which in Delhi are at worse levels than Beijing. Also moves to renewable energy, closing power stations in Delhi, and making industry responsible for their emissions will also help.  These things take time, energy and focus.

Air pollution in Delhi is caused mainly by industry and vehicular traffic.[7] As many as 10,000 people a year may die prematurely in Delhi as a result of air pollution.[17] The 1997 White Paper sponsored by the Ministry of Environment and Forests already proposed various measures to bring down pollution caused by traffic, including smoothing the flow of traffic with parking regulations and bringing down total traffic by mandatory limits on driving.[18] City authorities claim to have had some success in bringing down air pollution; for instance, during the bidding process for the 2014 Asian Games, the city’s organizing committee had claimed that “pollution levels had come down drastically in Delhi with the arrival of Metro rail as well as all public transport vehicle being run compulsorily on CNG(Compressed Natural Gas).”[10]

For traffic related sources, growth in vehicle numbers and mileage seems to outpace efforts to reduce emissions. [19] Contrary to popular belief, most of the air pollution in Delhi is not due to vehicular traffic. Main contributors to particulate matter in the PM10 range, as a recent study shows, are road dust (50%) and industry (23%)–vehicles accounted for only 7%. Among industrial contributors, power plants within Delhi city limits were the main culprits. (Wikipedia)

India as a whole has a high level of air pollution due to two and three wheeled vehicles not having catalytic converters (and most running on diesel), crop stubble burning, household cooking using biomass (wood, dung, rubbish), and other industry (source here).

India is still stunningly beautiful with so much natural and built beauty.  My photos (linked to above) show how much of a beautiful country it is.  Southern India was so vibrantly green it is hard to describe (especially compared to Melbourne), and the north was more arid and dry like I’m used to seeing in Australia.

My host, for the second part of the trip, was amazed when we told him that we didn’t have to pay any bribes in Australia to get a drivers licence.  He was astounded that bribery in Australia is not actually a thing (well it is, but not really).  He told us that he had to pay a bribe to get his licence, and for other things.  It is part of making the world easier I guess.  He told me that his wife’s father was prepared to pay a bribe in order for her to get a job as a teacher, but they would only pay the bribe when the offer of employment was made.

This knowledge then made me reflect more on an exchange I had had earlier in my trip.  We were travelling around the Banaglore – Kolar area looking at temples and the like with a guide that my host had organised.  The guide took us to a temple that is being carved out of a mountain.  We left our shoes at the bottom of the slope as the sign requested, and started walking up smoothed granite pavers towards the temple.  At the top of the slope, the pavers ran out and there was gravel.  My soft feet didn’t appreciate that, and I was soon limping when walking across the gravel.  At the temple we spoke to a group of young men who wanted to know where we were from, and a young couple who later asked us for an Australian coin.  When we were leaving the temple and commencing our walk back down the slope, I was travelling very slowly because of the gravel.  The young men went and spoke to our guide, and he then came to me saying that they wanted to loan me their shoes as they were unhappy that I was in such obvious pain.  I borrowed their sandals and had a much nicer walk down.

I asked our guide when we reached the bottom and I was returning the sandals if I should pay the young man for his generosity.  Our guide said no, that the young man really just wanted me to be comfortable and as that was achieved, he was happy.

The poor and the not poor

I had read before I went to India that India has one of the fastest growing middle classes in the world.  Wikipedia backs this up:

With one of the fastest growing economies in the world, clocked at a growth rate of 8.3% in 2010, India is fast on its way to becoming a large and globally important consumer economy. The Indian middle class was estimated to be 50 million persons (reckoning vehicle owners only) in 2007, by McKinsey & Company.[1] According to Deutsche Research the estimates are nearly 300 million people for all Middle Class.[2] If current trends continue, Indian per capita purchasing power parity will significantly increase from 4.7 to 6.1 percent of the world share by 2015.[3] In 2006, 22 percent of Indians lived under the poverty line.[4]

According to NCAER, India’s middle class population to touch 267 million in 5 yrs. Further ahead, by 2025-26 the number of middle class households in India is likely to more than double from the 2015-16 levels to 113.8 million households or 547 million individuals.

This means you see a lot of this 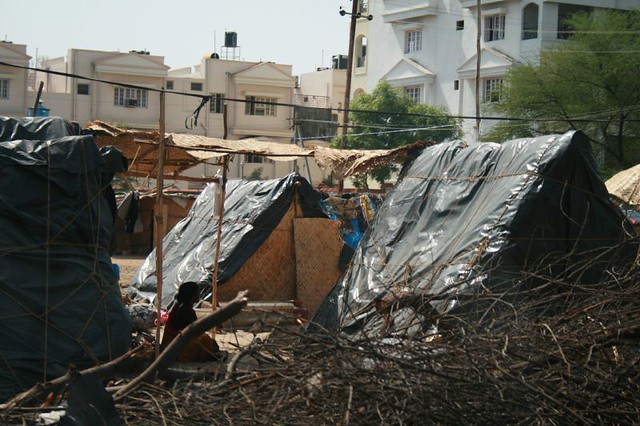 It’s a stark contrast when you see newly built houses with tents or brick shacks next to them.

This will all change.  India is rapidly growing and rapidly changing.  It won’t be the same country I visited in 10 years time.  It probably won’t even be the same country in 5 years time.  I won’t be rushing back to India, there is so much of the rest of the world I am interested in seeing, and experiencing.  But I am interested in going back at some point and seeing how it’s changed.